Yesterday was a bad day. Oh, it had its good points: Seeing the family at the ranch, having lunch together. The bad part was later.

A couple of hours after lunch, Dawn and Al went down to check on the very pregnant goats, and perhaps make a prediction on who would deliver first.

They called the house a little while later. One of the nannies wasn't at the barn, so they went looking for her. They found her lying under some trees, and not doing too well.

She had apparently aborted, and her uterus was prolapsed, i.e. protruding outside her body.

We called the vet, and he told us what we could try to do to help her, but warned that it was very difficult and unlikely to work. Al also was not optimistic. He had seen a cow with a prolapsed uterus die, and it was long and painful.

After a long discussion, we decided that it was best to put her out of her suffering.

I was the one who had to do it, and while it was a good thing to relieve an animal's suffering, it was still a bad day.

Monkey of the Day 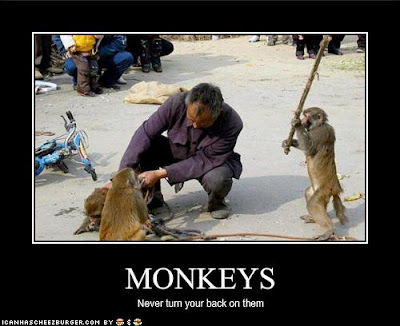 A Soldier's Night Before Christmas

From LawDog's site: This year, remember those spending their Christmas far from home.

My friend Hank is riding his BMW solo from San Antonio to the tip of South America. Stop in and read his postings from the road, and drop him a few words of encouragement...

This is central Texas. We don't do snow. Do we? 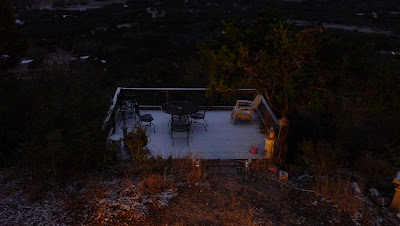 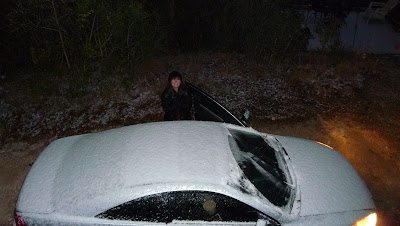 (Several of the photos in the post are not displaying correctly. Click on them to view full size and see the entire shot.)

Driving into the city on Friday afternoon, the colors seemed a little off.

Ahhh! Spiderman has us in his web!

Amy found something she liked at the M&M store.

There was a life-sized T-Rex wandering in one of the stores...

The Beaver Building. Not really. I don't know what building this was.

I love the zoom on my camera.

Despite temperatures in the 30-40's, there were a few bikers about.

Are we not the most stylish brothers you have ever seen?

There were two girls joined at the hip standing a few feet over from this sign. Not really. 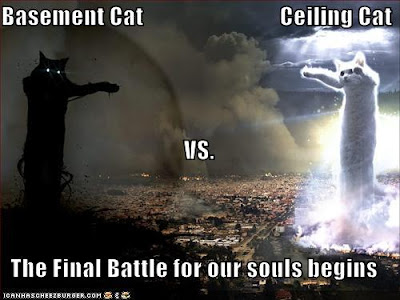 We prepared to drive into the Mystic, Ct. It was chilly.

I love seeing battlements on the hillsides.

I don't know what bridge this is, but it's beautiful.

Greetings from New York! Amy and I are comfortably settled in Hopewell Junction, enjoying (is that the right word?) the 33 degree morning temperatures.

We have been to the town of Woodstock, Mystic Connecticut (no, we didn't have any pizza!), and Newport Rhode Island.

It was cool to see a familiar logo in the Baltimore airport: 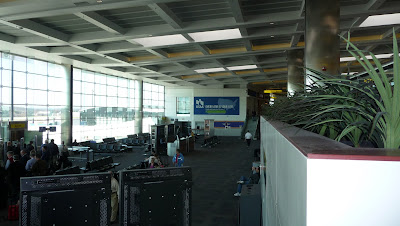 My brother Bruce and Amy: 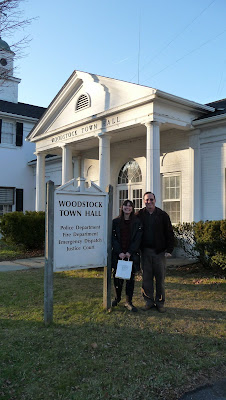 Those quirky little coffee shops sure have some cool flyers:
"The "The Band" Band" ???? 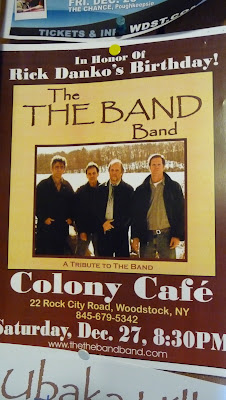 Captain! There be hippies here! 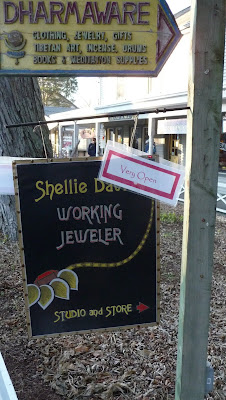 Feline Illuminati, or should I say, "illumicati?": 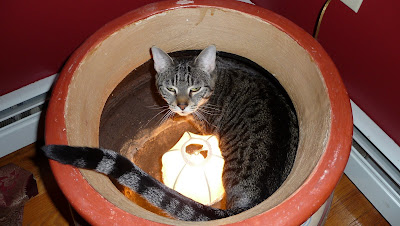